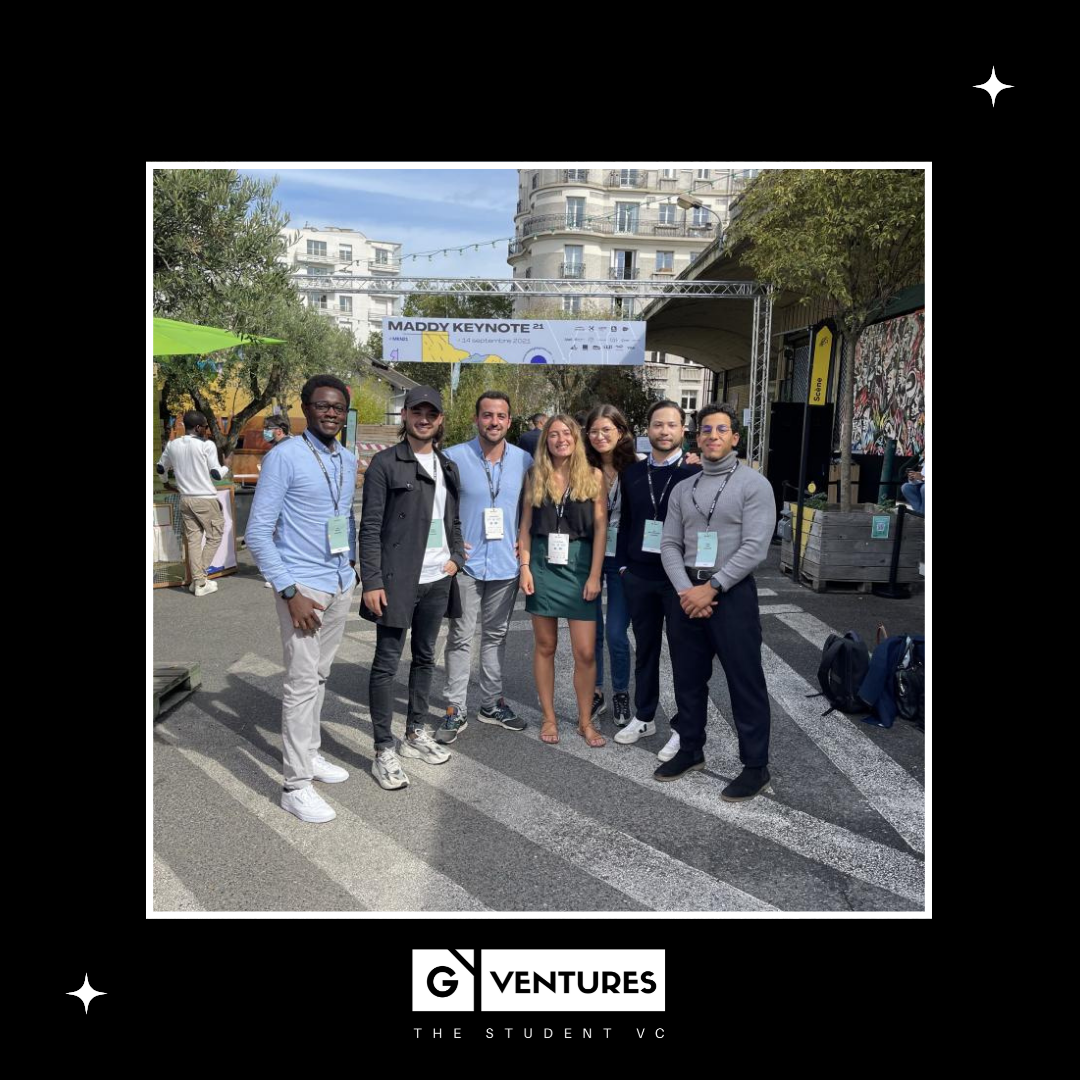 Maddy Keynote 2021, a review by G.Ventures

François Marty expressed himself in these words:

The art of governing does not consist in making desirable what is possible. It consists in making possible everything that is desirable.

This is a thought that sums up quite well the subject of the discussions that took place during the Maddy Keynote 2021, on September 14th. 6th edition of the Innovation Festival organized by Maddyness, the reference media for French innovation, the MKN took place at Ground Control in a place cleverly redesigned for the occasion and filled with speakers from all horizons and with certain expertise.

Environment, female entrepreneurship, economy, and technologies of the future, we will relive together how the MKN 2021 brought us to think about how to link society and innovation.

On the environment chapter, the day opened with a discussion that showed that carbon neutrality in 2050 will only be achieved through collaboration between large industrial companies and innovative startups, such as the GRDF group, as explained by Philippe Métzis, who is head of innovation and R&D projects, The company Axibio with its co-founder and President Pierre André Galy won one of these collaborations by designing connected equipment for the collection and treatment of bio-waste. The initiatives of this kind are legion, Gaëtane Pujol, sales director of new energies France of Total Energies explained how they also partner with startups to allow better support of Very Small Enterprises (VSE) and Small and Medium-sized Enterprises (SME) to the energy transition of mobility, startups bring solutions like G2mobility which creates intelligent charging stations allowing better use of resources.

Combining lessons from the past with solutions for the future, Marion Deridder Blondel, Marketing Data and Communication Director of Engie, Élodie Grimoin, founder of Urban Canopée, and Gaiarta represented by its initiator, discussed biomimicry, a science that aims to study living things to take them as models and reproduce certain characteristics. It is in this movement that Urban Canopée creates light vegetated structures to reduce urban heat islands by imitating the functioning of forests.

To stay in the futuristic domain and go deeper into the heart of nature and more precisely of plants, the very surprising vision of a future brought by Grow Your Cloud, a project where the very energy-consuming Data Centers will be replaced by plants and their DNA. This is the project led and presented by Monika Seyfried and Cyrus Clarke who imagine the biological cloud. Proof, if any were needed, that solutions can take many forms.

To take a step up, literally, it was environmental issues of a different kind that caught our attention. Space, once a dream, now tens of thousands of satellites are sent into space each year, space tech attracts many dedicated to the aerospace sector. With the presence of ARIANESPACE in the person of Raphaël Chevrier who has a role in Bid Management & Innovation, we discover the explosion of the market, how the low earth orbit has almost become a no-go zone called Far-West during the debate. This risk also represents an opportunity for startups that will engage in securing, protecting, and even recycling these new constellations of satellites and space objects. These include initiatives such as Orbit Fab, led by Daniel Faber, a solution for on-orbit refueling, but many others are called upon to address existing and future problems regarding the increasing accessibility of space and the related market. In this approach, François Chopard, an aerospace engineer by training, founded Starbust, which is the first global incubator specializing in the aeronautics and space sector.

There are thus many opportunities to allow the various initiatives to grow, nevertheless, the MKN also allowed to bring a critical vision of this search for innovation which could be done at any price. This was the meaning of the debate Low Tech vs 5G where The Shift Project represented by Hugues Ferrebœuf, namR created by Chloé Clair, and the SNCF group present through its digital director Julien Nicholas sat around a table to discuss the real usefulness of some innovations but especially the extent of their deployment. Thus, future initiatives could take into account the risks of overconsumption. It is in this sense that some actors such as the Léonard incubator represented by Guillaume Bazouin and created by VINCI promote projects around ConTech, technologies involved in the field of construction which has a very important share of global pollution. Here, innovation is not about hyper-productivity but about projects that rethink construction to make it healthier, opportunities like Rockease co-founded by Guillaume Richer, Build2B by Karim Tamarzist, or Lokimo that improve and optimize the field and therefore allow less energy waste.

This last company has moreover the particularity to have a woman as co-founder: Binta Gamassa, in a society that evolves, the startup universe needs more women and the MKN 2021 has also enlightened us on the subject.

A world with more parity

Fighting stereotypes and advancing parity, that was the meaning of the very first discussion of the day in the presence of the founder of Colori Mrs Amélia Matar, Sarah Saint-Michel, lecturer at the University of Paris 1 Panthéon-Sorbonne, but also the Vice President and General Manager of Salesforce France Mrs Émilie Sidiqian.

The scene is immediately set, we learn that according to a study published by the Boston Consulting Group and the collective SISTA that only 10% of startups had a woman in the management team and 5% by exclusively female teams.

Even more alarming, startups led by women are 30% less likely to be funded than their male counterparts, and even when they are funded they are funded to a lesser extent with 2% of total investments since 2008. To combat these problems, again there are opportunities to close this gap.

This is the case of Colori, which has created a method to learn to code from the age of 3 without a screen, the objective is to initiate children from a very young age to create vocations in the world of technology, especially among little girls. At a more advanced age, others have taken up the challenge of training, such as Social Builder, created by Emmanuelle Laroque, which raises awareness and trains women in the various digital professions.

If women are certainly going to take their place in the startup world in the years to come, it will certainly be a nice addition in an economy that wants to be even more competitive on a global scale and therefore needs all the talent available. The economy is constantly evolving, we will see in this last part how the economic world is evolving at high-speed thanks to entrepreneurial initiatives.

A world in constant evolution

The future of the economic world certainly passes by new ideas, innovations which rethink the traditional schemes.

A novelty that perfectly represents this idea is without any doubt the FinTech and the MKN brought us capital actors of the French market to understand how this one constitutes a gold mine for innovation.

This beautiful world explained to us how despite the very important regulation of the financial sector, many initiatives in the field could be born in particular thanks to the Blockchain. It is the whole world of banking that opens the door to opportunities, even if it is traditional by nature, there is a strong young clientele that is fond of new uses.

This is particularly the case for payment technologies, the democratization of crypto-currencies with projects such as Facebook’s Libra, its exchange with, for example, the recent IPO of CoinBase.

These cryptos are used in particular for completely new things, it is the case in particular of the NFT which takes a media and financial place more and more important. How not to mention the very recent news with Sorare, a French startup at the origin of a famous fantasy game of soccer of the same name based on NFT.

The company raised a record 680 million euros in funding and is valued at 4.3 billion euros. It has a community of 600,000 players, 180 partner clubs, and has sold nearly 150 million cards. We can therefore see that FinTechs are enabling a new kind of usage that can reach a very high level of popularity.

Nevertheless, and this is the characteristic of the Maddy Keynote, a critical look at the situation allows us to realize the possible drifts of this innovation. Indeed, the environments destined for a fast evolution are not the easiest to manage for the state and its legal machine which can take some time to adopt regulations that would be adapted. And here, the very nature of most FinTechs making that they have a real attachment only to the internet make that they could make the choice to exile in other countries more lenient or bring a more tangible legal framework, the parallel is obvious with the American digital people. Indeed, FinTech is and will be an element of competition between states, as we can see for example with the differences in funding across the countries of the view continent: 2.5 billion for Germany, 6.8 billion for the United Kingdom but only 1.8 billion for France, which is nevertheless catching up with strong growth. This is another door that is opening for those who can create projects in this area.

We have just seen the role of the State, which can be proactive in the evolution of its market by being at the forefront of legal issues. But it could perhaps do even more, in any case, this is a thesis defended by Jézabel Couppey-Soubeyran, economist and lecturer, who explained the functioning of an economic concept called helicopter money. In application, the idea is quite simple and will undoubtedly remind the recent actions of our American friends through the Federal Bank and its stimulus check, it would be for example for the European Central Bank to distribute 200€ each month to the 288 million Europeans over 15 years old.

This would represent nearly 60 billion euros per month, which would constitute an additional spending capacity. Following a crisis that will have escaped no one, the desired objective would be to relaunch economic activity, what is interesting in this thought is especially what it demonstrates, and it is the general opinion that emerges from this whole day at the festival of innovation by Maddy Ness: to be on the initiative to achieve change.

This change will come about through an evolution of society, which is brought about by a different vision, by a collaboration with large groups, by proactivity of the state, but also and above all by all the initiatives brought about by entrepreneurs. Others took part in this day, among them Guillaume Chaslot, a genius of artificial intelligence who warns against the bias of algorithms, Aude Nyadanu founder of the startup Lowpital specialized in design thinking applied to health, and many other exciting projects that we invite you to discover directly on the website of the Maddy Keynote.

And so, this retrospective of the day at Ground Control for MKN 21 ends. At G.Ventures we wish all the initiatives present at this festival and all the others a great success, we hope to support student projects that will also have their place very soon at this festival of great quality and we take this opportunity to thank all the speakers but also especially Maddyness for the invitation, looking forward to returning next year!